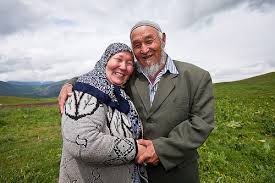 Cheerfulness is defined as “a state of being full of good spirits”. The Prophet Muhammad (peace be upon him) encouraged us to be cheerful in many hadiths. He (pbuh) taught us to be happy and to spread happiness to others:

(The Prophet Muhammad, pbuh, as recorded in Bukhari)

3. “Do not belittle any act of kindness, even that of greeting your brother with a cheerful countenance.”

(The Prophet Muhammad, pbuh, as recorded in Muslim, At-Tirmidhi)

4. “Do not abuse anyone…Do not look down upon any good work, and when you speak to your brother, show him a cheerful face.”

5. Anas narrates, “Allah’s Messenger had the best of manners. I had an adopted brother whose name was Abu Umair. He had a sick sparrow called Nughair. Allah’s Messenger used to be playful with him and ask him: “O Abu Umair, what has happened to your Nughair?” (A playful rhyme)

6. A man once requested from the Prophet the use of a camel. The Prophet replied, “I can loan you a camel’s baby.”

“What use to me is a camel’s baby?” queried the man. Laughing, the Prophet quipped, “Isn’t every camel the baby of another?”

7. “Fear Allah wherever you are; if you follow an evil deed with a good one you will obliterate it; and deal with people with a good disposition.”

(The Prophet Muhammad, pbuh, as recorded in Tirmidhi #5083)

9. Jareer b. Abdullah said, “The Prophet did not prevent me from sitting with him since I accepted Islam. He always smiled when he looked at me. I once complained to him that I could not ride a horse and he hit me (gently) in my chest and prayed, ‘O God! Steady him, and make him a person who guides others and a source of guidance.”

10. “Much silence and a good disposition, there are no two things better than these.”

(The Prophet Muhammad, pbuh, as recorded in Bukhari)

11. “Shall I tell you of him who will be shut out from the fire (of hell)? Every quiet, good-natured fellowman.”

12. “The most beloved of people according to Allah is he who brings most benefit to people, and the most beloved of deeds according to Allah the Mighty, the Magnificent, is that you bring happiness to a fellow Muslim, or relieve him of distress, or pay off his debt or stave away hunger from him. It is more beloved to me that I walk with my brother Muslim in his time of need than I stay secluded in the mosque for a month.”

The Prophet Muhammad (pbuh) was a cheerful man. He encouraged us to smile and to be good-natured. Even meeting another person with a cheerful disposition is a powerful act of kindness.