My Turkey Experience on Friday July 15, 2016 and COURAGE verses and hadiths 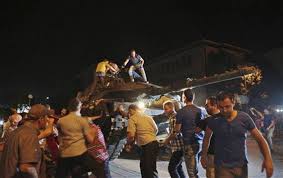 I was in Istanbul, Turkey on Friday night, about to catch a flight the next morning from the airport. I was staying with my sister who works for TRT World (the Turkish Government News Channel in English).

Around 9:30 PM we learned that a group within the Turkish military was trying to take over the Turkish government: a coup attempt. This group bombed the Turkish parliament in Ankara and took control of the bridge over the Bosporus Sea in Istanbul. The airport I was to fly from was closed down.

Using social media, Turkish President Erdogan urged the Turkish people to take to the streets in defiance of this attempted coup. At first, I thought that this was putting lives in danger, but then I realized that an overthrown government would also place lives in danger.

Around 1 AM I heard the Adhan, the Muslim call to prayer reverberating in the air, waking up anyone who was asleep either physically or spiritually. There is no prayer at this time; the call both praised God and indirectly said, “defend your country; defend the truth, defend justice.”

The streets flooded with thousands of people, civilians, willing to die for truth and justice. Men, women and children flooded the streets and climbed on the tanks of the traitor soldiers. Some people died and many more were injured.

I was struck by the courage of the Turkish people. They did not allow fear to stop them from standing up for truth.

It didn’t matter what you looked like, what ideology you followed. Everyone was united against the coup.

I stayed home with my kids while my husband and sister went out on the streets. We prayed and prayed for Turkey. Allah (swt) answered our prayers.

Here are some Quranic verses and hadiths that talk about the theme of Courage:

Mental or moral strength to venture, persevere, and withstand danger, fear, or difficulty

…And he said to his companion, “Have no fear, for Allah is with us…”

It is only Satan that suggests to you the fear of his supporters, so fear them not, but fear Me, if you are (true) believers.

Courage lies in the fact that we should fear only Allah and no one else.

You will most certainly be tested by means of your possessions and your own person. You would definitely hear (many) hurtful remarks, (insults, and affronts) not only from those who were given the scriptures before you, but also from those who associate others with Allah. (Despite that), if you persevere patiently, and be pious, then that is indeed an act of courage and fortitude.

One night the people of Medina were terribly frightened by a strange sound. Some people proceeded toward the sound. They saw the Prophet was coming from that direction. He had rushed before all others to find out what was the trouble. He was riding the horse of Abu Talha without a saddle and a sword was hanging from his neck. He was comforting people, telling them not to be afraid, and saying there was nothing to worry about.

The Prophet risked his life before anyone else to investigate a loud and frightening sound in the night.

Ali reported that in battles whenever the fighting started “We used to worry much about the Prophet because nobody was nearer to the enemy in the fighting than the Prophet.”

The Prophet’s actions always spoke louder than his words.