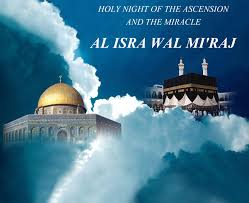 (This article of mine originally appeared on TheMuslimahNetwork.com)

Our beloved Prophet (صلى الله عليه وسلم) travelled from the Ka’aba to Masjid Al Aqsa in Jerusalem (the ‘Isra’), and then ascended from Masjid Al Aqsa to the seven heavens (the Miraj). Read on to discover the happiness lessons from this amazing journey!

This blessed and miraculous event occurred about one year before hijrah, 620 A.D. Scholars do not agree about the exact date, but many believe it was on the 27th day of Rajab.

Qur’anic references to Isra wal Miraj are found in the first verse of Surah Al Isra as well as in Surah Najm.

Exalted is He who took His Servant by night from al-Masjid al-Haram to al-Masjid al- Aqsa, whose surroundings We have blessed, to show him of Our signs. Indeed, He is the Hearing, the Seeing.
(Qur’an 17:1)

This blessed journey was a gift to the Prophet (صلى الله عليه وسلم) directly from Allah (سُبْحَانَهُ وَ تَعَالَى).

Then Jibreel brought the Prophet (صلى الله عليه وسلم) an animal called Al Burraaq, which was smaller than a mule and larger than a donkey. Each hoof of Al Burraaq could reach as far as the eye could see.

Happiness Lesson:
The Prophet Muhammad (صلى الله عليه وسلم) was given the greatest honour of being the Imam of all prophets. We are truly blessed to be in his ummah!

Then the “doors of the sky” opened for the Prophet (صلى الله عليه وسلم), and this was the beginning of his ascent (miraj) from Jerusalem.

At each of the seven skies (not to be confused with the levels of Jannah), Jibreel would ask permission for the doors of the heavens to be opened. At each heaven, a gatekeeper would say, “Who is it?”

Jibreel would say, “It is Jibreel.”

Then the gatekeeper would say, “Do you have anyone with you?”

Jibreel would answer, “Yes, I have Muhammad.”

The gatekeeper would say, “Does he have permission to pass?”

Jibreel would say “Yes” and then the doors of each heaven would open up.

In the third heaven, the Prophet (صلى الله عليه وسلم) saw Prophet Yusuf (عليه السلام)and the same greetings were said. The Prophet commented in a hadith, “I saw Yusuf and lo and behold it was as if he had been given half of all beauty.”

Happiness Lesson:
Your worship of Allah on Earth will be seen in Heaven.

Next, the Prophet (صلى الله عليه وسلم) went above the seven skies and saw Sidratul Muntaha, the lote tree at the very end of the seventh heaven. It is the boundary beyond which creation is not allowed to pass.

The Sidratul Muntaha has long branches and a fruit with a sweet scent and luscious, sweet taste. The fruit is as large as the “jugs of Hajar” and its leaves are like the ears of elephants. Colours cover the tree and the Prophet (صلى الله عليه وسلم) said, “I don’t know what those colors are.” Golden butterflies surround this tree. This tree was the last thing that the Prophet (صلى الله عليه وسلم) saw before he came to the presence of Allah (سُبْحَانَهُ وَ تَعَالَى). This tree is referred to as Ayatul Kubra in the Holy Quran and it is one of the most magnificent creations of Allah (سُبْحَانَهُ وَ تَعَالَى).

Below this tree are four rivers flowing. Two are hidden and two are visible. The two visible rivers are the Nile and Euphrates, which are blessed rivers even in our world. The two hidden rivers are seen only in Jannah: Al Kawthar and Salsabil.

Happiness Lesson:
Have hope in the beauties of the next world that await you!

The Prophet (صلى الله عليه وسلم) also saw Angel Jibreel in his original form. Jibreel has 600 wings that block the horizon, with pearls and corals dripping from his feathers.

HAPPINESS HINT: In a hadith recorded in Sahih Muslim, whoever recites the last 2 verses of surah Al-Baqarah on a nightly basis, then “that is enough” (i.e. he doesn’t need anything else). These two verses were received directly from Allah (swt) to help protect us from shaytan. Let us try to recite them every night, in shaa Allah.

The Messenger has believed in what was revealed to him from his Lord, and [so have] the believers. All of them have believed in Allah and His angels and His books and His messengers, [saying], “We make no distinction between any of His messengers.” And they say, “We hear and we obey. [We seek] Your forgiveness, our Lord, and to You is the [final] destination.”
Allah does not charge a soul except [with that within] its capacity. It will have [the consequence of] what [good] it has gained, and it will bear [the consequence of] what [evil] it has earned. “Our Lord, do not impose blame upon us if we have forgotten or erred. Our Lord, and lay not upon us a burden like that which You laid upon those before us. Our Lord, and burden us not with that which we have no ability to bear. And pardon us; and forgive us; and have mercy upon us. You are our protector, so give us victory over the disbelieving people.”

HAPPINESS LESSONS:
The five daily prayers were decreed on Prophet Muhammad (صلى الله عليه وسلم) while he was in the Divine Presence of Allah (سُبْحَانَهُ وَ تَعَالَى). This shows the high importance of the 5 daily prayers. The salat were decreed directly by Allah (سُبْحَانَهُ وَ تَعَالَى) to the Prophet (صلى الله عليه وسلم). Please never neglect your five daily salat!

The Woman in Paradise

He (صلى الله عليه وسلم) said, “On this night I smelled a fragrance that was very sweet and I asked Jibreel what was this fragrance. Jibreel said, ‘This is the fragrance of the one who used to comb the hair of the daughter of Pharaoh. She was combing the hair and the comb fell. She said ‘Bismillah (in the name of Allah)’ and Pharaoh’s daughter said, ‘You surely mean in the name of my father.’ The woman said, ‘No, Allah is your Lord and my Lord and the Lord of your father.’ Then the girl said, ‘Do you want me to tell my father you said this?’ The woman said, ‘Yes, go ahead.’ When Pharaoh heard this, he called this slave girl and asked her, ‘Are you saying that you have a Lord besides me?’ The slave girl said, ‘Yes. My Lord and your Lord is Allah.’ Then Pharaoh started a boiling cauldron and she was told she has to throw her own children into the fire, one by one. She said, ‘I have one request: that you take our flesh and bones and bury me and my children all together.” Pharaoh agreed. Then one by one her children were thrown into the cauldron until finally the baby suckling at her bosom was left. Then she paused. She couldn’t throw her baby in. Then the baby spoke to her mother and said, ‘O my mother go forth and drop yourself in. This is nothing compared to the punishment of the next world.'[ Imam Ahmad has narrated in his Musnad (Book of Hadith 1/310) [and a similar narration is in Ibn Majah (4020)]]

HAPPINESS LESSON: The hardships of this world are nothing compared to the punishments of the next world for oppressors. Have hope in the justice of Allah (سُبْحَانَهُ وَ تَعَالَى).

Then the Prophet (صلى الله عليه وسلم) said, “After salah had been prescribed on me, I entered into Jannah (heaven) and I saw tents made out of pearls and soil made out of musk.”

Types of People in the Hellfire

The Prophet ﷺ said that he also saw many of the punishments of the hellfire. For each group of people, he ﷺ saw in the hellfire, he ﷺ asked Jibreel, “Who are they?”

The Prophet ﷺ said that he saw the punishment of one who stole the orphan’s money. They had noses like that of camels (disfigured) and they would be eating coals made out of fire and their mouths would swallow these coals, which would come out from their anuses.

He ﷺ also saw people who had nails of copper and they were scratching their faces with them. These were the people who used to backbite all the time.

HAPPINESS LESSON: We must never backbite or gossip about other people. This is a great sin that will lead to much suffering.

He ﷺ saw people who had in front of them pure meat and then rotten infested meat and they were eating the rotten meat. These are the people who used to fornicate and commit adultery.

He ﷺ also saw people with such large bellies that they could not stand up and animals were being brought to trample over them. These are the people who would get their money from riba (interest).

He ﷺ also saw the dajjal and said that one of the dajjal’s eyes was bloated and his left eye is like a rotten grape.

The Prophet’s ﷺ Return to Makkah

Then the Prophet ﷺ came back down to Jerusalem on the Buraq. He ﷺ rode the Buraq back to Medina and passed by 3 caravans of the Quraysh that he recognised and he saw a man looking for a camel he had lost.
When he returned to Makkah he ﷺ went back to sleep and woke up in Masjid Al-Haram.

“When I woke up the next morning I felt an anxiety. ‘How am I going to tell the people what happened to me and what will they say? They are going to reject me.’

As I was sitting anxious and nervous and worried, the enemy of Allah (سُبْحَانَهُ وَ تَعَالَى), Abu Jahl passed by me and he saw me in that state. Abu Jahl said to me in a sarcastic manner, ‘What is the matter with you?’ I said, ‘Yes something happened last night. I was taken from here to Jerusalem.’ Abu Jahl asked, ‘If I call your people, will you tell them exactly what you told me?’ and I said yes. He called the people of Makkah and said, ‘Tell them what you promised you would tell them.’ So I told them about Jerusalem and Masjid Al Aqsa at Baytil Maqdis. People began reacting in different ways. Some were clapping their hands and snickering and laughing.

One person said, “Can you describe it for us?” The Prophet said, “I began describing Baytil Maqdis until they asked about specifics that I could not recall. I became so worried and anxious that I couldn’t answer. I had never been so terrified before. As I was thinking how to respond, I saw in the distance Baytil Maqdis rising up before me. It was descending in the house of Abu Talib (the house that he ﷺ grew up in). I answered every question they had until one said,”He is accurate.” (Recorded in Bukhari)

Then the Prophet ﷺ said, “I will give you some signs.” He ﷺ mentioned the 3 caravans:

“The first is so and so, the second is so and so and the third has an urn of water.” Abu Jahl said, “If this is true, then they should be entering Makkah.” The Prophet’s words turned out to be true.

A Final Lesson from the Story of Isra Wal Miraj

The purpose of Isra wal Miraj was to show our Nabi ﷺ his high status and to console him after all of his hardships. It was a personal gift to our Prophet ﷺ from Allah رضي الله عنه . When you are feeling down, doesn’t it cheer you up more when someone surprises you?

HAPPINESS LESSON: Even the Prophets of Allah needed an imaan (faith) boost. So don’t be hard on yourself if you sometimes feel spiritually low. The greater the difficulty, the greater the ease if we remain firm and faithful.

The great Islamic scholar Ibn Katheer said that if any person saw a fraction of these miracles, he would have woken up a madman. This shows us the imaan, courage and bravery of our Nabi ﷺ.