These Are the 10 Best Days of the Year for Doing Good Deeds: 5 Ideas 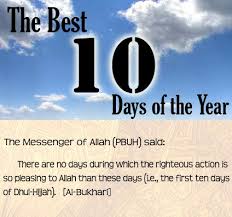 The Messenger of Allah (pbuh) said, “There are no days during which the righteous action is so pleasing to Allah than on these days (the first 10 days of Dhul Hijjah).” (recorded in Bukhari)

Alhamdulillah we have entered the first day of the month of Dhul Hijjah. The first ten days of this month are full of rewards and blessings. They happen to coincide with the first 10 days of September.

Millions of Muslims are performing the Hajj at this time. Here are 5 other good deeds to do for these days:

1. Fasting, especially on the 9th day of Dhul Hijjah:

2. Engage in the Remembrance of Allah (swt)

The Prophet (pbuh) said: “There are no days on which good deeds are greater or more beloved to Allah than on these ten days, so recite much Tahleel (saying Laa ilaaha ill-Allah), Takbeer (saying Allahu Akbar) and Tahmeed (saying Alhamdu Lillaah).” (Ahmad -Saheeh)
Ibn ‘Umar and Abu Hurayrah used to go out in the marketplace during the first ten days of Dhul-Hijja, reciting Takbeer, and the people would recite Takbeer when they heard them. (Bukhari)

This is a direct quote from an article written by Javaid Siddiqi at https://www.icna.org/virtues-of-the-first-10-days-of-dhul-hijja/:

“One of the biggest forms of worshiping Allah Glorified and Exalted be He is to thank Him, deeply, sincerely and continuously. After all, it is He who blessed you with all that you have. In fact, you wouldn’t even be here if it wasn’t for the Mercy of your Creator. So thank Him for ALL that He gave you: the blessing of Islam, the blessing of life and every blessing you possess. Thank Him for the opportunity to experience these ten days. Ask Him for His mercy, forgiveness and guidance.

Alhamdulillah, there is much to be gained in these coming days. So make the most of this perfect opportunity offered by these invaluable and irreplaceable ten days. Hasten to do good deeds and appreciate this blessing and make the most of it.”